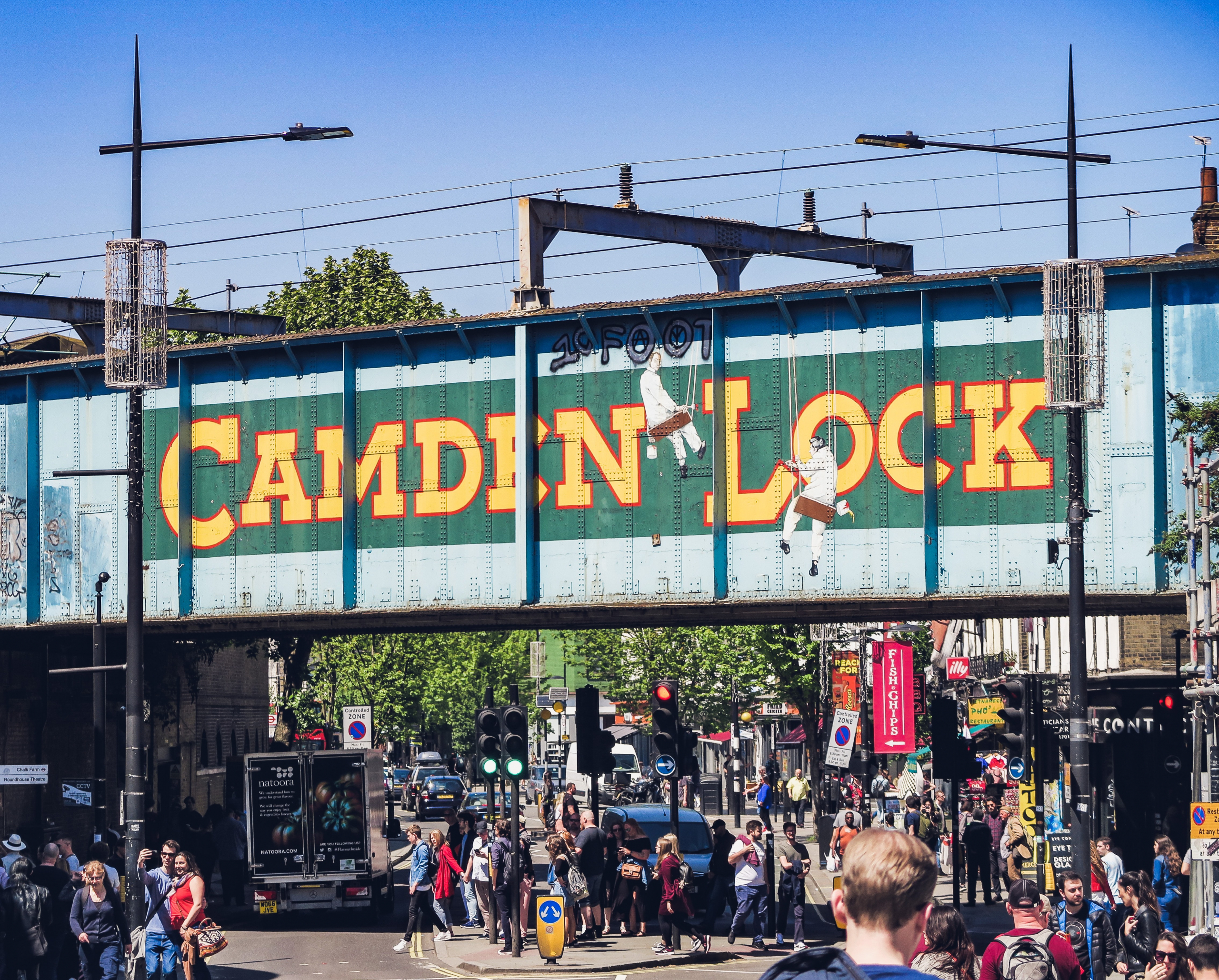 What’s it all about?

Often associated with alternative culture, Camden Town is a mixed, colourful and vibrant part of North London in the NW1 and NW5 postcodes. Camden Town has a strong sense of community and diversity to be involved with when living in this location. The area is full of stalls at the infamous bustling market, however, the area has so much more to offer. The music venues, bars and pubs are all popular destinations for tourists, visitors and Londoners alike.
Not surprisingly, art and creative types are a common resident of Camden, possibly due to the excellent transport links and the area’s lively energy. Although stereotyped as being for those looking for boho-chic, this part of London attracts city workers, artistic souls and young professionals alike. Despite its reputation as an alternative, grungy, hip area, the borough is one of the most expensive London boroughs.

Camden social life is what many people love about the area, with a seemingly endless selection of bars, restaurants and performance venues concentrated in NW1. Worthy of a mention are the Jazz Café, the Roundhouse, Ian Pengelley’s 200-cover Gilgamesh restaurant and bar, gourmet burger outlet Haché and the historic World’s End pub.

Although a vibrant bustling central location, Camden is still blessed with a large variety of outdoor spaces. There are 5 parks in the borough alone; Hampstead Cemetery, Russell Square, St George’s Gardens, St Pancras Gardens and Waterlow Park. They have recently had major renovation works done after receiving £5 million from the Heritage Lottery Fund. St Martins Gardens and Harrington Square Gardens are two further green spaces in the area.

Rail: St Pancras International, King’s Cross and Euston are a walk away
Tube: Camden Town Tube station in Zone 2 of the Northern line (Bank, Charing Cross, Edgware and High Barnet). Chalk Farm and Mornington Crescent also serve Camden Town
Overground: The local station is Camden Road
Buses: Many bus connections all over the city serve Camden Town, including the 168 (to Old Kent Road), the 24 (to Pimlico), the 214 (to Moorgate), the 88 (to Clapham Common), and the 134 (to North Finchley). Most night buses to north London stop in Camden Town
Cycle: There are cycle paths to both east and west London along the canal, and Camden is part of the route for the proposed North to South Cycle Superhighway

Camden’s state schools pride themselves on excellent teaching and a supportive learning environment for all, at all levels -both primary and secondary-, including Camden School for Girls, where Emma Thompson and Geri Halliwell went to school, as well as the prestigious Haverstock School. Eleanor Palmer School, in nearby Kentish Town, is one of the most sought after primary schools in the country.
PrevPreviousCrouch End E-VUE Area Guide
NextNotting Hill E-VUE Area GuideNext

Is buying a property for me?

The psychology of colours

Please enter your username or email address. You will receive a link to create a new password via email.

This website uses cookies to improve your experience while you navigate through the website. Out of these cookies, the cookies that are categorized as necessary are stored on your browser as they are essential for the working of basic functionalities of the website. We also use third-party cookies that help us analyze and understand how you use this website. These cookies will be stored in your browser only with your consent. You also have the option to opt-out of these cookies. But opting out of some of these cookies may have an effect on your browsing experience.
Necessary Always Enabled
Necessary cookies are absolutely essential for the website to function properly. This category only includes cookies that ensures basic functionalities and security features of the website. These cookies do not store any personal information.
Non-necessary
Any cookies that may not be particularly necessary for the website to function and is used specifically to collect user personal data via analytics, ads, other embedded contents are termed as non-necessary cookies. It is mandatory to procure user consent prior to running these cookies on your website.
SAVE & ACCEPT

Register your details and we will contact you to discuss the details of getting your property listed with us.